Part of a 12-part course on reading rhythm.

We already covered the fact that if you put a dot after a note it multiplies its length by 11⁄2. However, you will sometimes see a dot above or below a note, e.g. at the start of the “Andante” from Haydn’s “Surprise” Symphony:

which sounds like this (just listen to the first 18 seconds):

So what’s going on here?

The notes are obviously “detached”, which is in fact exactly what they’re called – “staccato”, which means “detached” in Italian – but we can be a bit more precise than that.

That’s a bit of a headache but is much easier to understand if you see it illustrated (click the image to download the PDF): 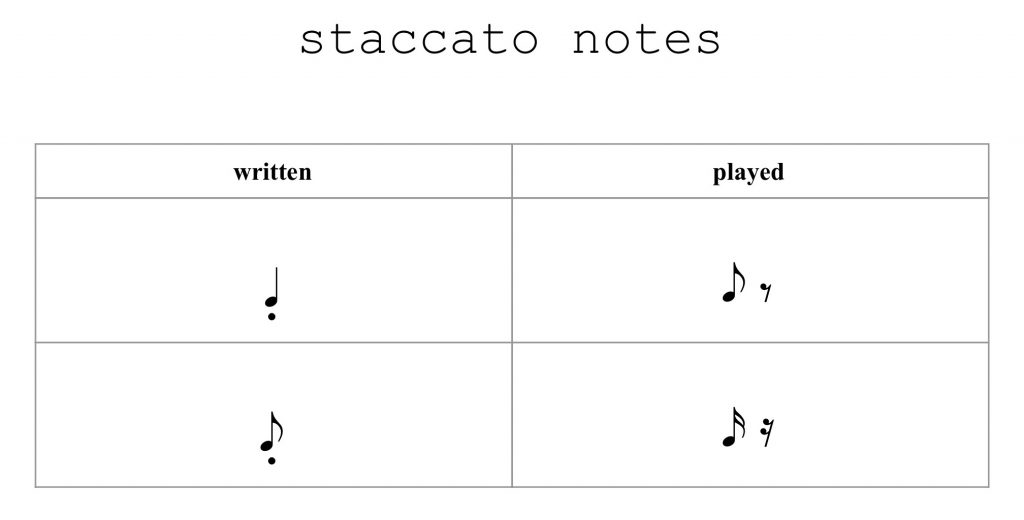 So the opening of Haydn’s Surprise Symphony is written like this:

but is played like this (“ten.” is short for “tenuto” which means “held”):

And the LH of Bizet’s “Toreador Song” is written like this:

(Click on any of the images for PDF’s of the full scores.)

Sometimes a staccato note is even shorter than half its length. For instance, in the original orchestral version of Albinoni’s Adagio the bass was played by pizzicato (“plucked”) strings, which I wrote as staccato 1⁄4-notes:

However, I recommend playing them as 1⁄16-notes rather than as 1⁄8-notes (i.e. as a quarter of their written length rather than as a half), to get the full pizzicato effect:

Why not just write the music the way it’s played? Because a note with a staccato dot is much easier to read and write than a note half its length followed by a rest. (Remember that music notation was originally hand-written.) In each of the above pairs of scores the 1st example is less cluttered than the 2nd.