Part of a 12-part course on reading rhythm.

Before getting into notation let’s think about how rhythm works in general and define a few basic concepts, starting with beats.

What is a beat?

You probably have a good intuitive idea of what a beat is already, but let’s examine that intuition and see if we can get to a definition. In general, if you’re listening to a piece of music and you’re tapping your foot, your foot is tapping on the beat.

The snare drum at the beginning of Stevie Wonder’s “Uptight” is playing on the beat:

And the bass drum in Daft Punk’s “One More Time” is on the beat:

So how do we define a beat, based on those examples?

Let’s break that down:

Compare these 2 clips. The 1st one is pretty fast:

The 2nd one is pretty slow:

Another way of saying that “the 2nd piece is slower than the 1st” is to say that “the beats are further apart in the 2nd“. So how do we measure how far apart beats are?

Using Beats Per Minute – or BPM for short – which is what it sounds like: how many beats fit in a minute. Yuja Wang is playing the Strauss at around 180 BPM. (So if you tapped your foot in time to the piece you’d tap your foot roughly 180 times in a minute, or 3 times a second.) The conductor is playing Albinoni’s “Adagio” at around 60 BPM (one beat a second) – a ⅓ of the speed of the 1st piece. So BPM varies quite a lot. (For comparison, Stevie Wonder’s “Uptight” is at 133 BPM and Daft Punk’s “One More Time” is at 123 BPM. Dance music is often around 120 BPM since that’s the rate of an elevated heartbeat.)

The speed of a piece of music is called it’s tempo (Italian for “time”).

Important: don’t confuse how far apart the beats are with how far apart the notes are. Later on in Daft Punk’s “One More Time” there’s a less eventful section which might feel slower, but the beat is the same (if you were tapping your foot, you’d continue to tap it at the same speed):

So how do we count beats?

And if we kept on going it would repeat:

The point being, we don’t count beats one at a time, or in a never-ending list, we count beats in repeated groups. In this case groups of 4, which is the most common, but it can be other numbers. Take the song “Oom Pah-Pah” from the musical Oliver:

That’s a repeated group of 3:

Note that the first beat of a bar is emphasised. They’re the “oom”s in “Oom-Pah-Pah”, which are also lower that the “pah”s:

You can hear the same pattern in Verdi’s “La donna è mobile” – the bass notes fall on the first beat of each bar, while the other beats are covered by chords:

So how to notate all of this? Well, we already established in my introduction to sight reading that a musical score is essentially a pitch/time graph, with pitch on the x-axis and time on the y-axis: 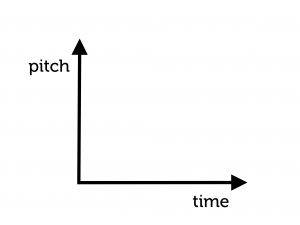 So maybe notate beats as vertical lines, perhaps with the first beat of each bar as a thicker line? 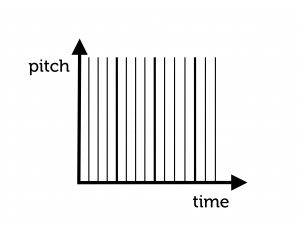 That’s how beats tend to be notated in music recording programmes, e.g. GarageBand (click the image to enlarge):

So that’s how beats are notated in scores as well, right?

If only life were that simple.

We’ll talk about how beats are notated later, but first we need to talk about notes.